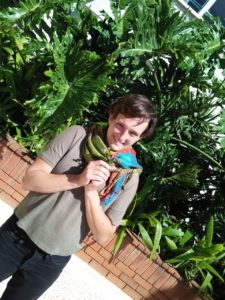 Welcome to the General Assembly (GA) of the Medical Students Association of Kenya (MSAKE). Medical students from all over Kenya – 7 over 9 medical universities were represented – came to the campus of Kenya Methodist University KEMU located in the green town Meru in Mount Kenya region.

MSAKE was founded only in 2007 and this GA hold for the second time, the first was in 2016. This is one of the explanations why MSAKE is still an association with a rather small number of active members. At the GA there were about 40-50 students – out of about 6000 Kenyan medical students! From University of Nairobi (UoN), the biggest medical university, 3 students found their way up to Meru.

Students joining MSAKE get knowledge and experience in trustful and competent leadership and democratic process. The organizing team of this GA doubtless had to face several shortcomings, as some speakers canceled last minute. The smart and flexible organizers though, by the way consisting of only two people, did everything but acting desperately and organized sessions by themselves, using topics they were familiar with and wanted to spread knowledge about (genderbased violence, Emergency Medicine, leadership).

Further we were honored by the presence of the patron of MSAKE, Dr. Joy Mugambi, Assistant Secretary General of Kenya Medical Association. From my point of view her speech was highly precious and encouraging for students.

Thank you guys again for having me there as a visitor, I really appreciated it!

Last saturday, december 8th, the Public Health Club (PHC) invited their members and interested people, especially students, to a get-together for the last time this year. They used this opportunity to organize the very first dinner for the club.

I had been kindly asked by the organizing team to give a talk as a guest speaker which honestly surprised me at first, so I took the honouring request as a chance to reintroduce the cooperation programme between Unified for Health (UFH) and the PHC. Of course some already know about the cooperation due to the projects of last year, but others were new to the club and might have never heard about UFH. This was a good opportunity to remind people of the partnership. 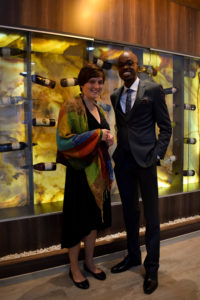 Probably the dress code ‚cocktail‘ gave some participants a busy preparation time, but when finally everyone arrived we counted about 60 people. Micheni, who led us through the evening passionately, welcomed everyone, introduced the speakers and opened the delicious buffet: typical Kenyan stuff like chapatis, rice and beef or chicken stew, but also pasta and fish-fillet.

When the talks started, Becky warmly welcomed each speaker again. Now it was my turn to start: I introduced myself, explained the idea of the Public Health Exchanges, sent warmest greetings from Sarah and Peter, who are currently staying in Frankfurt and I talked about the main goals of the UFH clinic partnership. Currently we are working on the programme here in Nairobi for beginning of next year. Guys, feel free to get in touch with me or other UFH members, in case you have topics you want to adress during 2019 agenda! You would really make me and the whole UFH team sing and dance once we receive your input!

I would like to briefly state some bites of the input the other speakers gave.

Dr. Ashley, an emergency doctor working at KNH, explained the importance of thinking about Emergency Medicine as a matter of Public Health, although of course it is not replacing preventional care. Still, in low and middle income countries (LMICs) most emergency patients are at young age, which results in high numbers of disability-adjusted life years (DALYs) and loss of economic resources. Further, poor infrastructure and low educational level concerning First Aid leads to poor outcomes of emergency patients. In fact, most of them do not even reach Health Care facilities.

In 2020, a conference for emergency medicine in East Africa will be hold in Mombasa, so if you are passionate about EM or even have the chance to collect data, you still have time to get prepared to present it at the conference! 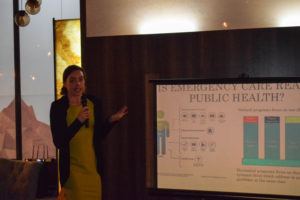 Dr. Nduati, an experienced pediatrician presented a project which emphasizes on putting students into research activities at an early stage of their career, in fact it is a 10 weeks course which involves training followed by establishment of their own research project. You can apply for it at the start of next year. Dr. Nduati presented data which clearly shows doctors who had been involved in research at some point of their education are significantly publishing more papers per year than doctors who didn‘t get this chance.

After her talk she forwarded the microphone to her surprised looking husband, a civil engineer, to share some of this experience in building road infrastructure. He mentioned that during his studies they had been given even more lessons on Public Health than tere are nowadays for medical students. 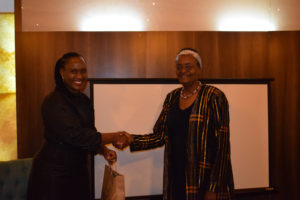 Dr. Nduati‘s passionated talk was followed by Dr. Odhiambo, a specialist in Internal Medicine. He talked about the burden of cancer, which has to be adressed in particular in LMICs, in fact 70% of all cancer around the globe is found in LMICs. Dr. Odhiambo previously didn‘t hesitate to face efforts at educational level: He had run a youtube channel called ‚what you need to know about cancer in Kenya’

Further he emphasized on strengthening the research sector in Eastern Africa regarding cancer, as regional circumstances lead to specific underlying causes of cancer. An example therefore is the high number of oesophagus cancer found in the Malaria Belt Region. 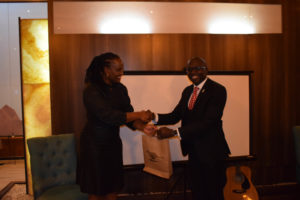 Nearly each talk was followed by life music: Students presented songs and were playing the guitar and even the violin! Joy Mueni even impressed the audience with her own song in which she expressed her emotions of the every day in Kenyan hospitals. 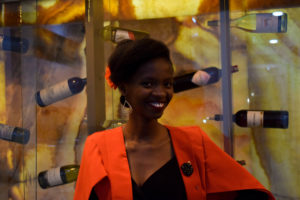 What a fruitful and enjoyable event, I got home stunned by people‘s efforts and filled with positive emotions. Again, I would like to express my deepest thanks to all who brought this evening alife!

Lyrics of the song:

Chorus:
I need help,
We need healthcare
I can’t take this no more
We must do something more

Spoken word:
See I hear them talk about universal health coverage
And I wonder whether universal, really covers us all
Just as the universe is formed by different planets going round their orbits,
Our world is formed by different men, us who buy big G and those who can afford Orbit.
Money speaks they say,
I say money heals too.

See, the backstory in my story may sound familiar
As doctors may call it, has diseases familial
My mother had cancer,
My father hypertension,
We needed care but for her,
but we couldn’t afford it,
They didn’t even earn a pension

Insurance covered just as much as it could
But to see their mother suffer, no one should
I remember each day I was giving her food,
Until one day, I couldn’t see her again for good

Her hair had fallen off,
Now, she was a fallen soldier
How many in this army shall we lose?
Is the commander in chief really aware of these losses?

Shouldn’t it be cause for alarm
Or maybe they think unless its contagious, it’ll cause no harm
They forget the effect it has on the economy
A burden that rids us of our autonomy
Dependant on aid, dying of AIDS
But I don’t want this style of life
Constant fear, worry and strife!

I raise my arm in protest
But whom really can I detest
The nurse who’s overworked?
No, let me just wait to be clerked

After hours of waiting, I finally see the doctor
This child of ours, she says, needs a shunt
The liquid in his brain is increasing and pressure is going up,
They need to drain it, otherwise his brain will wither up

Mine too guys.
Mine too.

The liquid is increasing,
In alcohol my sorrows drown.
The pressure increasing,
The problems aren’t going down.

Pause.
(explain how this is a true life story)
How many people cannot afford 500 shillings:
– to buy a shunt?
– to pay monthly NHIF
– to pay for a hospital bed
– to buy drugs each day
– to come for dialysis
How many people ?

We all must put ourselves in the shoes of our brothers and sisters.
Walk a mile with them in empathy, not just sympathy.
Even the world screams whats mine is mine, let’s go back to the days of unity. Ujamaa. Equity. Kidole kimoja hakivunji chawa.
Tusaidiane