From 18th to 24th November World Antibiotic Awareness Week in Nairobi took place, with dozens of events all over the city and me and members of PHC participating in some of them.  This years motto was “Handle antibiotics with care” – while focus in previous years was mainly on antibiotics use in the medical field, this year’s events also valued showing the importance of limitting antibiotics use in Agriculture.

Following, I will highlight some of the events: 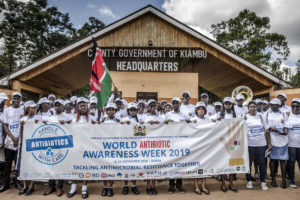 Members of WAAW (Working to Advance STEM Education for African Women) , the Kenyan medical associtation, the food and agriculture organisation and several student-clubs marched together, to promote awareness of antibiotics use in agriculture. After that, doctors, veterinarians and professionals from several fields came together for a discussion on how to address challenges connected to AMR in modern agriculture, including limiting AMR use on increasingly dense farms, raising awareness of the dangers of unmonitored antibiotics use and fighting the practise of antibiotic use in subtherapeutic settings. 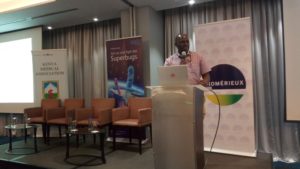 The Kenyan medical association, with support from some partners, that I don’t have to mention here. The event was very informative, regarding how researchers, lab technicians and practicioners can work better together, to improve Antibiotics usage.

While these events and others during the week, were well prepared and thought provoking, I took some issue with the strong involvement of pharmacological companies in funding and presentation. While I don’t think their influence on the general direction of the event was that big, it might have affected how certain things were characterised. The focus was deffinitely on better antibiotics use, not on decreased antibiotics use,  in the medical-oriented presentations as well as in the agricultural oriented ones. 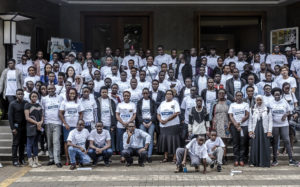 Finally an event, where members of Public and One Health club at Nairobi University had their own contribution. Members of One Health Club around the city did live skits and musical performances, that where both artistically valuable and well researched. Some performances will stay in my mind for a long time.

To end the student organised part of the event, I had a short presentation, representing UFH, on how informed consumers can slow down the progression of AMR, both in the medical field and in agriculture. Medical professionals should work harder on informing the public about AMR. If opinion on Antibiotics changes, unsupervised, over the counter usage of antibiotics will decrease. Also, informed consumers can limit the use of antibiotics in agriculture, by supporting legislators and organisations, working on the issue, and also by their choices in buying animal-based and plant-based products. I was glad, for being able to add an additional perspective to the event and had some interesting talks after it.