My public health exchange luckily coincided with two big public health events in Nairobi, the first of them being  World Diabetes Day on 14th november. The universities public health club already had some plans, so I was happy to join in and support them.

Our work before the event included finding financing, where UFH luckily stepped in and provided some funding, to enable us to have the event. Kamau and Carol, members of the public health club, had already settled for the general direction of the event, and invested a lot of energy into making it happen, but we were still presented with challenges including finding a location for it and figuring out ways, we could give meaningful advice and information to the people, that we would see on the 14th.

Our goal for the event:

My work before the event included helping Carol with the information pamphlets, finding laboratory cutoffs for the glucose testing, where we should advice people to get professional advice and preparing the workshop for Kenyan medical students.

There were still some insecurities before the event, but luckily the Director of Clinical Services and Kenyatta Hospital approved the event at the last possible moment and we could set up our tent in front of the hospital on the 14th. 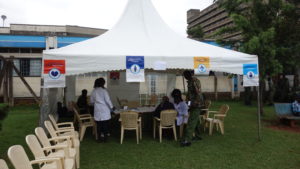 After setting up everything, the event started at around 10am. Carol, me and another 5 medical students started to talk to people, and while peopel weren’t that interersted in the beginning, as the morning progressed more and more people came in and a line started to form in front of the tent.

Mostly the free glucose testing attracted a lot of people. And while pricking their fingers definitely didn’t find a lot of fans, most people were thankful for getting the news that their glucose tolerance was normal. We ran into some problems though: Some of the people we tested actually had a very low glucose level. So we had to go to accidents and emergency to get some information on what to do in this situation. Luckily we didn’t have any people with a blood glucose lower than 3 mmol/l, so we mostly advised, having a meal immediately and we didn’t have to make any referrals to A/E. 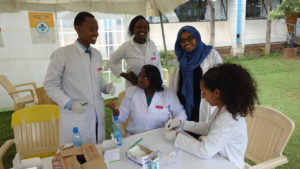 The majority of people was really interested and asked a lot of questions. In the end we could address many fears associated with diabetes, inform about a healthy diet and lifestyle and create a better understanding of diabetes.

We tested and talked to about 130 people. Of these, 15 were either in the diabetic or prediabetic range and we advised them to get further testing. A highlight  of my day was talking to prisoners, with a very limited access to medical care. One of them had a dramatically high glucose level and we could arrange for him to see a doctor on the same day. In the end the event was an overall success. Unfortunately , turnout among med-students wasn’t that great, so we postponed the workshop on Diabetes and Diabetes examination. 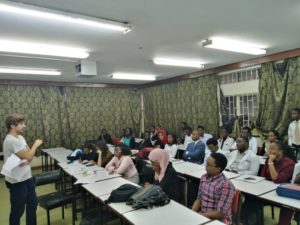 Luckily, the research-club at Nairobi University provided me with an opportunity to still have the workshop on the 30th of November. About 35 students of different levels attended and we talked about diabetes cases, the importance of taking patients with prediabetic conditions seriously, laboratory findings and ultimately Diabetic-foot-examination. The session was well received, included some interesting discussions and in the end everyone left the room with some additional knowledge. 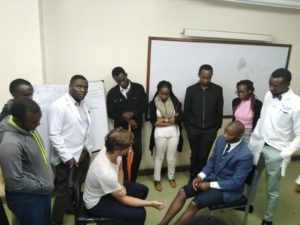